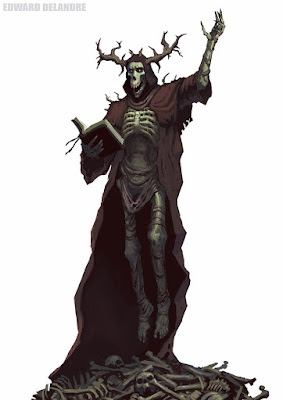 Necromancers are reviled the world over, with the exception of the Qynarate, where they fulfill the role of both priests and slaves, forced by the Undying Empress to channel their grotesque craft toward the unholy task of keeping the state running. For all but the highest, it's perhaps a worse existence than everywhere else, where you'll just be hunted down by the locals and lynched or by the Church and burnt.

Further, necromancers are limited by their focus on thanatologies. They haven't the breadth of magic-users, and the day-to-day existence of a necromancer is often unpleasant - grave robbing and corpses, rotting flesh, and malevolent, life-hating intelligences.

So why do people turn to necromancy? Simple: it's easy, and it's fast. Necromancers gain power amazingly quickly, and all you have to sacrifice is your humanity.

In addition to their spellbooks, at 2nd level necromancers must make a pact with some malevolent intelligence. Non-exhaustive examples include a powerful undead, a demon, or another necromancer. As part of this pact, a necromancer learns 1 new spell whenever he gains a new level, but must complete some task for his patron (and may be required to do so between levels as well, if he wishes to keep the patronage).

Reaching 9th level: Upon reaching 9th level, a necromancer may create a stronghold, often a tower. He will attract a number (1d6) of intelligent undead (wights, wraiths, ghouls, but never mummies or vampires) and 1-3 necromancer apprentices of 1st level.
(Further, it will be difficult to attract peasants for tax revenue. 1/4th is a good starting point.)

Protection from Evil
As MU spell

Foul Grave
Duration: Permanent
By means of this spell the necromancer desecrates a grave-site. A body interred in such a grave is practically guaranteed to rise again as an appropriate form of undead, probably a wight or a wraith.

Corpse Essence
Duration: Permanent
Range: Touch
The caster draws forth the lingering vitality of a fresh corpse and infuses it into himself, gaining 1d4hp per HD of the dead creature. The corpse crumbles to dust in the process. It must be fresh, having died no more than a week ago.

Preserve Body
Duration: One Week
The necromancer temporarily halts the decay of a corpse, fending off all natural sources of rot and dissolution. Magical rot and trauma (such as from attacks) will still harm the body, but it will not suffer from bacteria, vermin, etc. This spell only halts decay; it does not reverse it. This spell may be cast on the animated dead.

Cloak of Death
Duration: 3 turns
Range: 30'
The subject of this spell is perceived by undead to be 'one of them' or otherwise not a threat or target. Intelligent undead get a saving throw to resist the effect. If the subject attacks or otherwise harms the undead, the spell ends.

Raise Ghoul
Duration: Permanent
This spell allows the caster to raise a new ghoul from the dead. It requires a fresh body no more than a month dead (or well-preserved) to work with. The ghoul thus raised is the slave of the caster and must follow verbal commands, but he doesn't have to like it.

Aspect of Death
Duration: 1 turn
Range: Personal
The caster's visage becomes supernaturally gruesome and chilling, striking terror into all who behold him and fail a saving throw vs. spells

Animate Dead
As the Cleric spell of the same name, but the necromancer can raise twice his level in HD of skeletons and zombies.

Ward Against Turning
Duration: 6 turns
Range: 60'
The necromancer whispers his will to the undead, letting them add half his level to their effective hit dice to avoid turning attempts. A necromancer may ward up to his own level in hit dice of undead with this spell.

Rip Out Spirit
Duration: Concenration
Range: 20'
This gruesome spell allows the caster to violently separate the spirit from the flesh of the target. If the subject fails a save vs. death, he loses 1 level (or hit die) per round until he dies or the caster ceases to draw forth his spirit. The caster must concentrate and do nothing else for the duration of the spell.

A spirit drawn forth in this way may be stored as per Soul Jar, though it does not get the ability to possess other vessels. Intelligent creatures only. Elves are immune.

Inflict Rot
Duration: Permanent
Range: 60'
If the subject fails his saving throw vs spells, he is imbued with a supernatural rotting disease. He loses 1d6 CON and CHA and is unable to heal naturally or magically from any inflicted wounds. A cure disease followed by remove curse can end the effects.

Raise Wight
Duration: Permanent
The caster raises a new wight from an available body. The body must be freshly slain (no more than 1 week old) or well-preserved. The wight thus raised is slave to the caster and must follow verbal commands.

Raise Wraith
Duration: Permanent
The caster raises a new wraith from an available body. The body must have been slain over a year ago and buried with grave goods of no less than 50gp worth. The wraith thus raised is slave to the caster and must follow verbal commands.

Summon Shade
By means of this spell the caster summons forth a shade from the dead. He may then ask it three questions before it returns to whence it came. The caster must have some strong link to the shade - a part of the body, a dear object, or being in a specially important location - and any given shade may only be summoned once. The shade will only know things that it would have known in life. In order to cast this spell, the caster must sacrifice at least 1hp worth of fresh blood (though it need not be his own).

Eldritch Life
Duration: Permanent
This spell breathes life of a sort into the dead. To cast this spell, the necromancer must spend 2d4 weeks preparing the body for its 'resurrection'. When first chosen, the body must be fresh, slain no more than 1 week ago, or very well-preserved (think formaldehyde, not mummification). This spell only works on humans and demi-humans (elves included).

When raised, the new 'person' will have no memories of his former life, and must be taught everything - how to speak, how to read, how to eat, etc. (Neither will he have any class levels from his former life.) There is a 5% chance that the raised creature will be subtly insane, gradually becoming homocidal and monomaniac.

Revitalization in this fashion will give the new 'person' unnatural strength and vigor, imbuing him with 2 (d8) HD, max CON, and max STR. If not insane, the creature will be strongly attached to the caster, as though Charmed (but permanent, and unable to be dispelled), unless and until the caster tries to kill or seriously harm him.

Any given caster may only have one such raised companion at a time, for if he raises another inevitably they will go to great lengths to kill one another.

Raise Mummy
Duration: Permanent
The caster raises a new mummy from an available body. The body must be properly mummified, which takes at least a week and 500gp of materials unless you happen to have a mummified body sitting around. The mummy thus raised is slave to the caster and must follow verbal commands.

Raise Spectre
Duration: Permanent
The caster raises a new spectre from an available body. The body must have been slain over a year ago and buried with grave goods of no less than 200gp worth. The spectre thus raised is slave to the caster and must follow verbal commands
Skull Spirit
Duration: Permanent
The caster raises a new skull spirit from an available skull of an intelligent creature. The skull must be clean of all flesh and not seriously damaged. The skull spirit follows the verbal commands of the caster. (Stats for skull spirits can be found at the end.)

Soul Leech
Duration: Special, see below
By means of this spell, the caster consumes a stored spirit. Consuming a spirit may give many benefits. Choose one:
Haruspicy
This spell functions like the clerical spell Commune, except that the caster must kill and read the entrails of some creature as part of the spell. Further, use of unintelligent creatures only grants 1 question.

Death Spell
As per the MU spell

Lich
Duration: Permanent
This spell infuses the caster with necromantic energies that prolong life into undeath. It must be cast three times exactly a year and a day apart from one another. If the caster misses a subsequent casting, he dies and his body turns to dust with no chance of resurrection. Further, each casting requires reagants costing at least 5,000gp and a week's careful, uninterrupted preparation.

If successful, there is at first no outward change to the caster. However, when he dies either from old age or any other source, he will not die. Instead, he will continue on as a lich. (Exactly how to handle this is up to the DM.)

As promised, stats for a skull spirit

A skull spirit is the skull of some intelligent creature animated by dire necromancies. Wreathed in blue flame that does not burn, it flies about in the air, supported by magic. A skull has no damaging attacks, but its gaze is deadly. Anyone who fails a save vs. petrification is drained of 1 level. Anyone who dies in this fashion will come back in 1d4 days as a wraith.

Skull spirits do not arise naturally, and therefore are seldom found without their masters. The No. Enc. is a guideline for how many to include guarding key locations, treasures, or with other monsters, but a skull spirit will never have treasure of its own.