I've been reading books by real world adventurers lately. These are people who actually did what we pretend around our tables to do: these men went out into the deep and untamed wilderness, crawled around the hexes, and even in some cases descended into dungeons. 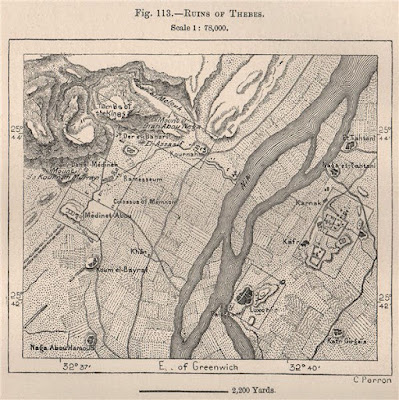 I'm really not in the mood for more introduction today. Too much other stuff to get done, and my creativity wears thin along with my sleep schedule. So I'll skip the coy insinuations about 'verisimilitude' and 'howling empty wilderness' and so forth and get straight to the potentially gameable lessons about what their expeditions have in common and how they work. (Note also that I don't have any interest in claims about whether or not these adventurers were representing themselves and there adventures accurately. That way lies politics.) 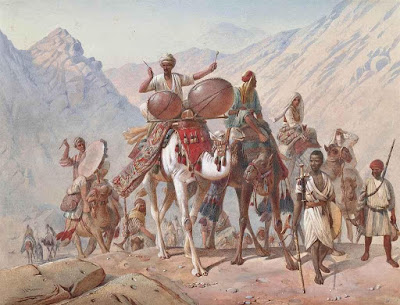 Adventurers travel in caravans. For one thing, there's safety in numbers, but for another, for
any serious length of time you need to bring a caravan to carry all the stuff you need. Food, (sometimes water), tents, gifts, weaponry, various utility supplies (rope, lights, etc.), clothes, gifts (see below), feed for the animals, etc. Caravans will slow you down, since you have to deal with drovers and animals and all the little inconviences that crop up, but without a caravan you're just heading out into the bush to starve to death.

One further advantage of a caravan is that it gives you a disguise. You can travel as a merchant instead of an adventurer (or foreign conqueror).

Finally, bringing a caravan allows you to set up a base camp (see below).

This is part and parcel with the caravan. Caravans need lots of people. At the bare minimum, if you're just bringing a feed pony and a gear pony along with your own mounts, you'll need a drover, a varlet, and a guide. With an actual caravan you need drovers, packmasters, servants, and possibly guards.

A decent rule of thumb is that you need roughly twice the number of (non-combatant) followers as you have pack animals, and if you need guards you need at least half that many. This doesn't include guides, retainers, or camp followers.

Caravans generally move from settlement to settlement. Cities and towns are few and far between, but small villages (mobile or otherwise) are more common. For one thing, paths are more likely to lead you that way, so unless you're blazing trail it's going to happen naturally. For another, native settlements are places to rest, resupply, and learn about the country. You can hire on more people (or animals) if you lost some. You can recover from sickness. You can set up a base camp to see local sights or hunt the local animals (or monsters). You're unlikely to be able to replenish food at a village, though (depending on temperment) the villagers may very well feed you.

You will want to hire native guides to the territory. They know the paths and the dangers, at
least until over the next hill. They also know the local people, which can be an advantage or a disadvantage. A native guide will probably steer you safely where you want to go, but he might think you're crazy for wanting to go there. He might have ulterior motives for trying to convince you to go somewhere or leading you along a particular path, like wanting to bring you to his home village so his family can sell you horses (and fleece you). He might be from a tribe with bad relations with another tribe in the area, and so want to avoid particular paths or settlements. (You might even get bad relations with that other tribe by being seen with him).

Still, a native guide is all but indispensible. Otherwise you're just wandering around in the wilderness.

Often this is further enforced by some other external factor that makes that goal worth attaining outside the simple personal notch-on-the-belt experience for the adventurer.  To use the above examples, Burton was looking for Harare because he was speculating and spying for the English crown. (The area around Harare later became the English colony of Rhodesia.) Livingstone was looking for the source of the Nile because the Royal Society put him up to it.

Knowledge of places and things therefore becomes important. External agents will offer rewards (or, if you're reputable, fund you beforehand) for specific pieces of information, such as the location and defenses of cities, the sources of rivers or other important geographical features, cultural knowledge from remaining artifacts, decryption of local languages, etc. Each power that wants something will want something specific, though (depending on the nature of the place) they might be happy with something else. The King is going to want military information, but the College of Sages might be overjoyed to gain mummies and surveys of a burial mound when they originally sent you to learn a new language. Or they might not.

Hirelings (and natives) are not equals

Generally speaking, hirelings are going to be hard-working or lazy. In either case, they expect you to be in charge of the expedition and act like it. We're not running a democracy here; you're the guy in charge. The lazy and duplicitous ones especially take a firm hand. An example from Burnaby: his drover didn't want to load up the pack animals at the proper times, because he didn't like the pace Burnaby set. Further, he would pack up sloppily, and when the burdens fell apart use the excuse that Allah wills all things, so what can we do? to which Burnaby replied by kicking and beating him soundly. When the drover protested, Burnaby replied, 'Allah wills that you be lazy, and Allah wills that I beat you for it, so what can we do?' After that, he never had another (large) problem with the drover.

The same goes for natives, although less so. When you first come upon a native tribe or village, the members are going to either assume you are higher status than they, or they will test you to see, sometimes to the point of aggression. If you try to be overly accommodating, that may be a sign of weakness. Of course this varies from people to people; knowing how to behave is earned by experience and good counsel.

This is best illustrated with an anecdote from Sir Richard Francis Burton.

Crossing the Fiumara we ascended a hill, and found upon the summit a large kraal alive with heads of kine. The inhabitants flocked out to stare at us and the women uttered cries of wonder. I advanced towards the prettiest, and fired my rifle by way of salute over her head. The people delighted, exclaimed, Mod! Mod! —“Honor to thee!”— and we replied with shouts of Kulliban —“May Heaven aid ye!” 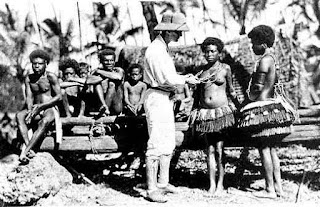 You aren't going to get anywhere with natives or others without bringing things to give away as a sign of your magnanimity and good-will. Even among those who prize generosity to strangers, if you're constantly taking without giving back you'll quickly sour your welcome. These don't have to be expensive, but they do have to be valued. At the same time, if you show yourself to have too free a hand, you're setting yourself up to have a train of beggars and thieves. Recognize who's in charge and be generous to him and his people.