My brain is melting 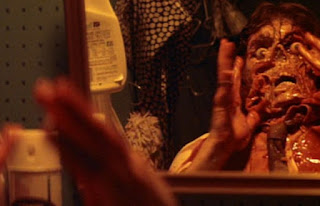 We're entering crunch time in the Halter household, what with the end of the semester coming up, along with the impending occupation of various (mostly in-law) relatives for the holidays. On top of that, my mind is beginning to wander: I was eaten by Factorio for a few days (an addiction that thankfully wears off quickly) and other such things.

On top of that, I'm starting to run into the question of how much to put here, on this blog. I have a bunch of cool ideas I want to flesh out, but how much setting-specific info do I want to publish? After all, while it's unlikely, a player might stumble upon this blog (once I have any).

I'm probably going to publish a lot of it anyway, since this space is primarily geared toward getting my head on straight and my ideas past that vague beginnings stage where, without sufficient impetus, I always keep them, because I'm bad at content production.

All that said, I have made some (slow) progress on my megadungeon. I have an entryway that's five different entrances disguised as one, and I'm about halfway done mapping the first section of Level 1. By the time you see this post, I hope to be a good bit further along. When I'm done I might post the map for criticism and to talk about some interesting things I've run into as a newbie mapper.

At the same time, whenever I start thinking about the Desolate North and what I need to do to get to play, my mind stubbornly refuses to stay on task. Instead I think of hex contents, weird history and hidden stories, other settlements, how to handle tribes, new rules for expeditions, what kind of monsters I want stocking my wilderness, and on and on and on. These will probably make it into this space, subject to the caveats above.

The more I dwell with it, the more I like the Desolate North. It started out as a kind of Great White North/Nanuk thing, purely because I like the cold. But that quickly becomes boring if you stick to it too hard. So over time it's morphed into a kind of Alaska meets Central Asia schtick, giving me more room for varied environments, other settlements, and possibly even (depending on interest) a fantasy version of the Great Game focused more on colonization instead of vassalization. Still, at least at first I want to avoid town adventures and political intrigue - at least until I and my players are comfortable with the decor and want to move the couch and paint the walls a bit.

A lot of the way my thinking has evolved is due to +Hill Cantons. I've already borrowed his concept of the Weird and given it my twist. I'm hopeful that Queen's Landing will slowly twist into something strange and beautiful layered over that Cold Botany Bay core I've set out. We'll see.

I'm hopeful that through the holiday season I'll be able to keep up my enthusiasm and my impromptu twice-a-week schedule. Wish me luck.
Posted by Unknown at 2:36 PM