Post-mortem on a blog (and campaign)

Those of you who were following this blog before have by now no doubt noticed that it is dead. Dead, dead, dead. It was merely wounded, once, and the surgeon did all he could, but after hours of frankly gruesome work on the operating table, up to his elbows in readership, he finally relented and declared it dead.

The campaign it chronicled limped on, at first unharmed by this admission. But it too died, grown alien and bizarre to the wishes of both its creator and its players. It reached a natural point, and so we graciously led it into the stall and quietly shot it in the head. We were all agreed: it was a mercy killing.

Here's the autopsy, in no particular order, for both the blog and the campaign.

Part of the problem was just the group and the group dynamics. Rather than being a gaming group, this is more a group of friend(ish) people who get together to game. The distinction I'm making is primarily that the attitude toward actually getting down to brass tacks and playing your character is much more relaxed, and at least two people are there primarily to shoot the shit with friends. Also, the social order comes first, meaning you can't, for example, kick people out of your game if they're not a good fit for whatever reason. Problems that stem from this were in no particular order:
In addition, character creation was a chore. GURPS, with templates, computer assistance and good knowledge of the options, is not hard to make a character for. However, even with those assumptions it still doesn't beat 3d6 in order. It just can't. Even if you shave it down to take less time (say, experienced GURPS player vs. never rolled up a character in D&D) it still involves more thought and complexity. This is bad for a game where life is cheap, not only because it raises the barrier to entry, but it also shifts some of the emphasis of player decisions into making the character rather than playing the game. (More on this in another post, if people want.)

Further, creating content for the game was becoming a chore. True, I'd already converted the Moathouse and portions of the Temple, come up with random encounter tables and cool stuff, and so forth, but still. The difference in the systems got to be too great. As an example, in GURPS Dungeon Fantasy, the emphasis on tactical combat is at odds with D&D's low-level focus on exploration and problem solving, which meant that I had to do a lot of 'sprucing up' of the dungeon in order to make it both interesting and a challenge. Another way to look at it is that the Temple became not only a chore, but a boring one - I would have been better off writing a dungeon for DF from scratch. The game assumptions, from how to play to how rewards work, were too fundamentally different for me to remain interested in the task of reconciling them.

All of that also makes it pretty clear why the blog died, with a couple of added points:

For those who absolutely, positively must know what happened after Calowas died, what follows is a hyper-abbreviated run-through of the rest of the campaign.

The player of Calowas brought in a bard, and they all went back out to the Moathouse again. They found that it was now populated by a group of gnolls, previously down in the basement and now broken with Lareth. They ambushed the gnolls pretty effectively and had a fairly one-sided skirmish before the surviving gnolls retreated. While they were picking through the bodies, they discovered that there were also some goblins when the gnolls sent in their goblin thralls to make a truce.

A truce was made, involving non-aggression and information on the one side, and money on the other. The party proceeded downstairs and found Lubash the ogre, who killed the scout and the druid (new player) before being brought to bay. Picking through his stuff they found enough treasure to call it a day.

Coming back, they went down again, skipped past the zombie crypts once more to check out what was beyond the ogre, and found in a large dead-end room a bunch of bugbears. The bard went to 'talk' to them, and found they were pretty well set up, being bugbears - hiding behind an overturned table, ready in ambush by the entrance, etc. They quickly negotiated a monetary truce, and while the bugbears were waiting for the party to throw in the money the party instead threw in a Stench cloud. Bugbears stumbled out wheezing one at a time and the party whacked them all.

Wandering around a bit more, the party found the other end of Lareth's guards and had a long conversation that ended with the party apparently agreeing to go see Lareth. The sergeant told them to put down their arms and follow him, which is when the bard (same player as Calowas) again shot one of them. Cue pitched battle in the hallway with the wizard saving the day with a Mass Sleep spell. After this they go to see Lareth, who is presented as pretty hoss (like he is in the Temple - fourth level Cleric with magic plate and a rod of striking), so they listen to him and are on the verge of possibly joining up when they (still primarily elves despite casualties) find out he worships Lolth.

Cue another battle, this time in magical Darkness against a death-touching cleric (Rod of Striking = 2d deathtouch per blow) which ended well for the party due to a couple lucky hits from the Knight and then the Barbarian getting her big mitts on Lareth and smashing his head into the ceiling repeatedly. His guards didn't have a chance to come in and help him because the party was wisely blocking the door at the same time.


After that, the party looted all the stuff in Lareth's room and on his body (a very nice haul indeed) and we called that the end of the campaign.

Some corpses are not quite what they appear. 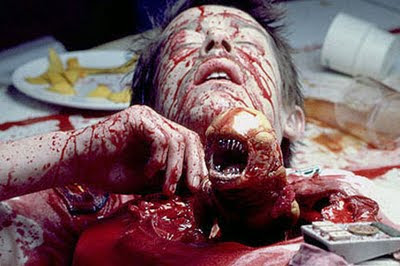 I've started a new campaign, this one using Swords&Wizardry Complete. It's going decently so far; we've had four sessions and everyone seems to be having fun. It's too early to tell, but I think it'll last through June, when I plan to move to the DC area. The setting is Keep on the Borderlands, but the world is expanded beyond the Caves of Chaos; I've put in the Caverns of Thracia to the south a few days, and Hommlet (along with attendant Temple) is up the road to the east. In addition, the players recently acquired a map of the world within roughly four days' travel, which has forced me to expand further. Still, they're focused on the Caves for now.

I need somewhere to put session notes so I don't forget them. I also need a slush file for ideas for house rules or settings or whatever, so I don't forget them. Some of these I'm already using. Some of them I might be planning on building into a larger setting I'm toying with putting together for finding a group after I move. And some of them might be things I find cool, but need to put away because they don't fit the sort of game I'm playing or want to play.

I still love the system, but I've left it behind for now. S&W fits my current gaming needs better. I might finish some old posts from before the changeover. Don't count on it. I might occasionally have ideas for GURPS. (E.g., I think it's the best system for running something like an Axis Mundi game, which I'd love to do if I could a) trust myself to be creative and devious enough to make it fun and b) find a group that wouldn't lynch me for pulling that on them.) Don't count on that either. If you were here solely for GURPS content, I'd recommend you follow other, better blogs anyhow. (see, Gaming Ballistic, Dungeon Fantastic, T Bone's Games Diner, and a bunch of others that I'm unavoidably insulting by not listing but that you can find by following links from those blogs.)

However, if you were here because you wanted to follow another small corner of the OSR, you're more than welcome to stay.

I was really torn between an Alien reference, a Lovecraft reference (“That is not dead which can eternal lie, And with strange aeons even death may die.") and a zombie reference. I think I chose the right one, because this blog is turning into a different creature through the death of the old one.
Posted by Unknown at 8:40 AM