Fifty years ago, then-King Marcus II of Albilonia had an idea. Banditry had been a perpetual problem for the realm and he was determined to put it to an end. The rule of law would be established. But carving a new standard of civilization on the hearts of the people requires harsh measures, and soon the prisons were bursting at the seams, and many of the hanging trees were in full fruit.

So he issued a proclamation: everyone in the Kingdom who is found guilty of theft, robbery, banditry, rape, murder, etc. has a choice to either serve out the sentence as usual or indenture himself to the Crown for a period of time dependent on the crime. Those who choose the latter are shipped to Queen's Landing.

Queen's Landing is reached by ship from around the spur of the Spine of the World, a huge mountain range that marks the end of the Known World on all civilised maps. It was chosen as the site for the new penal colony because these mountains are impassible, it has a natural harbor, and when Robin the Seafarer landed here during one of his fabled journeys he discovered salt at the base of the mountains right by the sea. Thus, most convicts sent to Queen's Landing serve out their terms digging in the salt mines, and salt is the primary export.

Queen's Landing is ruled by Lord Marchand (whose family rebelled against the King around two hundred years ago) whose primary concern is to keep the salt flowing. While it is mostly populated by men who have finished their terms of service (indentured servants are kept in communal barracks), some have brought their families with them. Anyone can come to Queen's Landing if he wishes, and volunteers will even be paid a resettlement fee by the Crown, so the town does boast a small but non-negligible number of women and children, many of the former doing a brisk business in the town's whorehouses. The free population of Queen's Landing fluctuates around five hundred souls, with another five to eight hundred slaves attached to the mines.

Queen's Landing is situated at the mouth of Robbers' Bay at the base of the Spine of the World, which makes it the northern-most known dwelling of civilized men by far. The land stretches away to the north and west, remaining rugged and mountainous for as far as surveys have seen. Conifer forests are the rule, at least near the town: what the geography and flora are like further into the wastes none can say.

The town is walled all round with a stout timber pallisade and permanently garrisoned by fifty men of the King's Army under command of the Governor. This is in part to guard against an uprising at the salt mines, and in part simple prudence. For those caught in misdeeds in the town justice is swift and summary: another term in the mines, or exile. No doubt most of those exiled die, but it is just possible that some do survive.

The residents of Queen's Landing subsist mostly on hunting, trapping, and fishing. The growing season is too short for most crops, being only two-and-a-half months, though in lucky years crops of potatoes and sometimes rye can come in. Just recently, experiments with herding the local wildlife have been undertaken, adding butter and caribou meat to the staples of the colony. Very occasionally the hardy fishermen manage to snag a whale: these creatures are often seen cavorting in the Bay, and are prized for their blubber, which makes excellent oil.

Queen's Landing imports much more than just labor: because of its situation it will be dependent upon the Kingdom of Albilonia for basic foodstuffs like wheat and almost all finished products for the foreseeable future. Most trade is done in salt, which is also the primary export. Others are obvious from the above: furs, fish, timber, and precious stones (more on this last below).

Humans are by far the most common race in Queen's Landing, even moreso than the home country. Next come dwarves: these hardy folk do well in the harsh conditions, being generally hale of limb and body, easily acclimated to the cold, and not as worn down as men by the gruelling work in the salt mines. Indeed, most come voluntarily, wanting to see the Spine of the World and live in its shadow. Not one elf has been sent to Queen's Landing to work as a slave, and only a handful have come as volunteer settlers, since they have a hard time with the cold, but the rugged and wild beauty of the wastes does draw some. Most rare of all are halflings: not only is the cold and hard labour harder on these folk than any other, but they find the necessity of covering their parietal eye with headgear to keep from freezing due to their baldness both disorienting and depressing. (The widespread feeling among halflings of the Kingdom is that you would have to be demented to want to do such a thing.)

Using Queen's Landing as a base for Adventure

The town itself is an isolated spot of safety at the mouth of a great unexplored desert. The Desolate North doubtless has its share of unknown treasures and opportunities for those bold enough to risk hypothermia and who knows what other dangers. In the past few years, a few 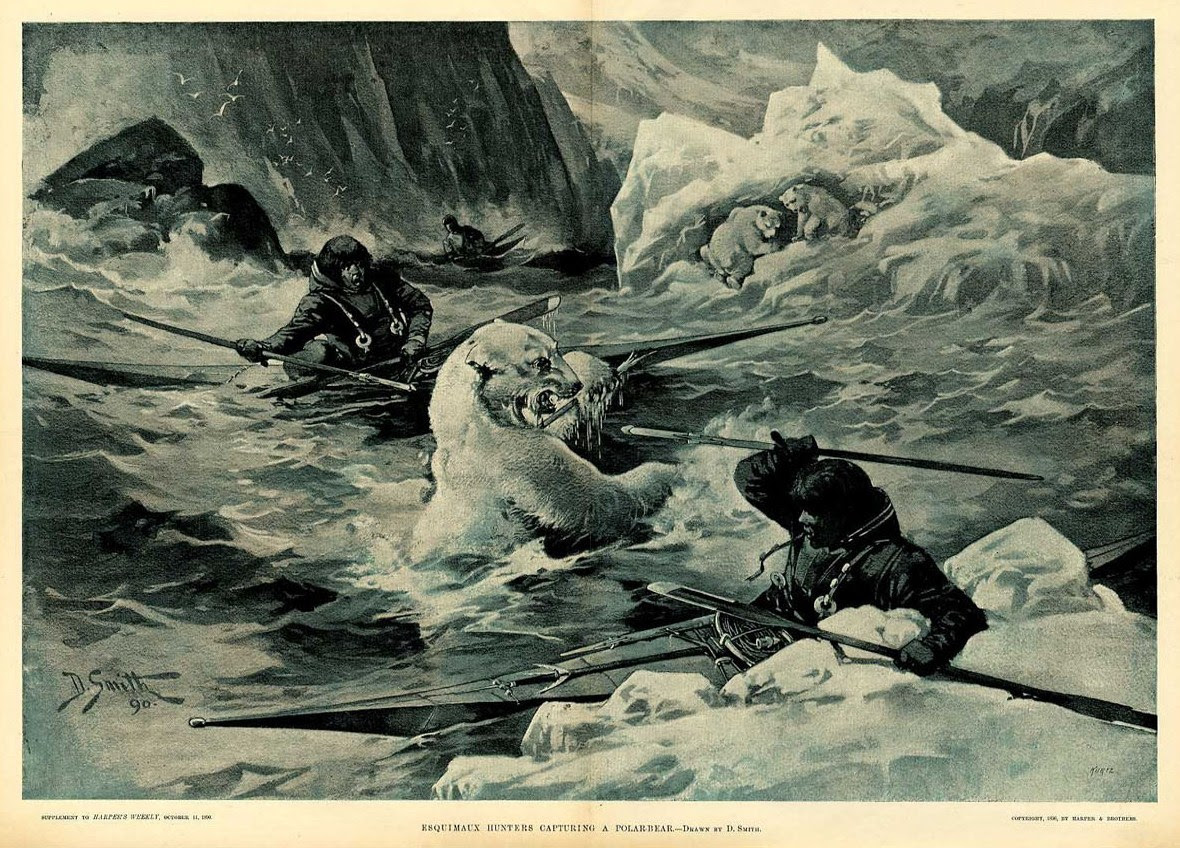 adventurers have trickled north to land here, hoping to make a fortune. Recently, Queen's Landing has made contact with a tribe of indigenous peoples who seem open to trade and bring tales of ancient ruins buried in the ice which never melts. One dwarven sage insists that the Spine of the World is the site of an old dwarven megapolis from before the Great Opposition turned the North into a barren wasteland. And, most promising of all, one band of adventurers recently returned - missing three members and looking like walking, frostbitten skeletons, but with seventeen sapphires, each the size of a thumbnail.
Posted by Unknown at 3:38 PM No comments: