I think I've finally decided to get my gumption up and try my hand at creating a new campaign.

About a year ago, I had to leave my old one behind to move to a new job and a new school. This was really a shame, because I had a group of players who seemed to really 'get it' and they clicked pretty well together. We were having great times. Alas. Yes, I know I could have tried to keep it up with something through Roll20 or G+, but even if that had been successful, I'd have sorely missed the face-to-face element. Those guys were just fun to hang out with.

It's time to start another. Last time, I plopped down B2 and used it as the core, planning to expand later. It's a good solution, but this time i want to try making something original. I still want large portions of the world to be decided via co-creation with the players, both because that's easier for me and it's a lot more fun, but I want to start with some specific ideas.

I think I'll be starting with a tentpole dungeon; one that will perhaps turn into a megadungeon, but I don't plan on that initially. I'll also add a large swath of wilderness for later hex-crawling.

I'm conflicted about some of my possible plans, though. For example, I'm fond of the idea of severely reducing the variation of goblinoids (who needs goblins, orcs, hobgoblins, and bugbears? just replace them all with norkers and bandits), but at the same time I want to have room to plop down existing modules if they strike my fancy, because who doesn't want the Caverns of Thracia hanging out somewhere in their game world?

At the moment, I'm fond of the idea of a wilderness with a large main river running into a map-defining bay, forming a delta and a saltmarsh. Hopefully I can advise you to stay tuned to this space for further developments.

And now for the price of admission.

During WW2, the Swiss government undertook a massive military project to hollow out the Alps for use as military bases and population centers in case of German attack. They also mined all the roads and passes, and wired all their bridges and many of the mountain-sides to collapse. The plan was to sacrifice the main valley - which could not be held against the superior war machines of either the Axis or the Allies - but to make taking each new mountain, and each new valley after it, into a living hell for which the Stalingrad campaign is but a pale comparison. After the end of the war, the project continued, fortifying Switzerland against the possible outcomes of the Cold War, even to the point of proofing these bunkers against the use of tactical nukes.

In effect, the entirety of the Alps is a string of dungeons.


In true Swiss fashion, many of these have since been turned into cheese caves, for the maturation of Gruyère-type cheese. While it seems less cool, this is actually a good thing for us, since it means you're much more likely to get a look inside.

Many of them also include suspended footpaths between mountains, so cleverly concealed from above that you can't find them even if you know where you're looking. It only takes a little imagination to turn the whole of the Swiss Alps into a megadungeon, waiting to be explored. Especially if, in some alternate historical future, "the Swiss delved too greedily, and too deep."

For those who are interested, plenty more pictures of old Swiss military mountain caves can be found here: Fortifications Suisses
Posted by Unknown at 6:39 AM 3 comments:

Email ThisBlogThis!Share to TwitterShare to FacebookShare to Pinterest
Labels: inspiration

I've heard and read a lot of complaints that tracking encumbrance is just too much work, or too fiddly, or too unfun. I sympathize. After all, who wants to be ciphering and double-checking rules every five minutes instead of killing goblins and taking their stuff? Yet at the same time, people do recognize that encumbrance management is an important part of the game: it's about recovering treasure, and part of the core mechanic of the game is figuring out how much you can bring out for what level of risk.

There are a fair number of good alternatives out there, but none of them quite feel right to me. So I made my own. 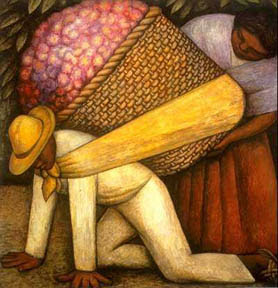 Before going on an adventure, calculate your encumbrance according to the normal rules. You're in town; it's time for bookkeeping anyway. Additionally, you can choose to re-calculate encumbrance according to the normal rules at any time, so long as you're not bogging anything down in the game. By the same token, the DM can require the same, of course

Item classifications and their meanings

Once you're on the road, items come in two main categories: Small items, and Large items. What category an object falls into is a combination of weight, bulk, and how much care must be taken with that object in trasport. It's important to note that this only matters for new items you pick up, since you're using your previously-calculated encumbrance as your starting point.

Small items don't weigh you down. Some common examples of small items include swords, scrolls, potions, cloaks, very small rugs, helmets, and spellbooks. 100 coins also count as a Small item in my game.

Anything not big enough to be a small item basically doesn't count against encumbrance. This includes rings, jewels, certain other jewelry (often assuming you're wearing it), lockpicks, and generally anything that would easily fit in the palm of your hand and not feel terribly weighty.

The name's pretty much self-explanatory; these things require at least two adventurers to cooperate to move them. Two-man items count as two Large items for each member of the moving team. Examples include large chests, armoires, and elf-sized statues.

The core works pretty well all by itself. People I've played with have agreed that it hits the sweet spot between complexity and plausibility, allowing them to actually make meaningful choices about what they'll carry while not feeling like it takes too much time and effort. However, over time I've identified some tweaks I like to make to differentiate characters and some further rulings I've made that help the system feel more complete.

Dwarves can carry one extra Large item before being doubly encumbered, because dwarves are naturally doughty. (Woe betide the dungeon denizens who run across a Dwarf with 18 Strength; they'll all be naked.)

Halflings on the other hand can carry one fewer, because they're tiny.

Elves are roughly human-sized, but slightly smaller. Some items that would count as Small for a Man might count as Large for them, and they only get four Small items to the Large (unless you forget or don't care).

These rules assume that characters are entering the dungeon with a backpack and the very basic pockets, ties, and such that come with clothing made for adventurers or outdoorsmen. If for some reason this isn't the case, reduce carrying capacity to suit. (Naked people can carry three small items - one in each hand, plus one between the teeth.)

Ponies and donkeys can carry three Large items. Horses can carry five. Mules can carry six. Good luck fitting a mule in a dungeon. Other more fantastic animals are up to the GM.

Medium chests can carry up to 25 Small items, but they count as 2 Large items. (You can share this load between 2 people if you can't carry enough, and this allows you to easily drop it in combat.)

Large chests are Two-man items, and can carry up to 50 Small items.

A hand-cart or wheelbarrow will allow you to carry 50 Small items by yourself, but of course you aren't going to be stealthy and you aren't doing anything else with your hands.

Potion belts, scroll belts, and the like carry 5 or so of the specified Small items and count the total as just one Small item.

Once you get to wagons and the like, you've grown beyond the limits where this system is useful.

Use your judgment on what to allow players to put in bags. Just because a glaive is a Large item doesn't mean it'll fit into your large bag.

I like this system because I find it easy to run at table and easy for players to understand. It doesn't require looking things up, ever. I also think that, because of the ease of use in play, it opens up inventory management as a real object that can be manipulated in play. For example, a cursed Loadstone is two Large objects that cannot be put down. Further, temporary effects can really, actually be useful or debilitating in play without requiring a mood-crippling amount of number fiddling. As proof, below I'll share two spells that have made it onto the Cleric list in my game.

This spell allows the subject to carry one more Large item before experiencing any encumbrance effects. Only works on humanoids.

This spell causes the subject to feel the extra heft of 2 more Large items. Save vs. magic to resist.