Starter dungeon for the Desolate North

While I have your attention, can I point out for a second that it feels weird to have a buffer of posts? I'm writing this about two weeks before you'll see it. Anyhow...

I've finally completed my first real attempt at a dungeon. A mega-dungeon it is not. It only has one level, and will not get a standard party of 5 level 1 adventurers up to level 2 even if they find all the treasure (OK, that's a bit of a lie given the special items.)

I'm posting it here because
Given that this isn't a mega-dungeon, I eschewed all normal 'random' stocking rules in favor of going with the theme of the place and the world. It might be terribly unbalanced. I don't know.

Outside The Setup portion, which isn't in my notes at all (doesn't need to be), I'll be writing this up exactly like it is in my notes. The exercise is show and tell, for the reasons listed above, not 'clean this up for production'.

Production has stopped at the salt mine that was the principal reason for the founding of Queen's Landing. The overseer cannot get the slaves back into the mine - they simply won't go. A few days back, a section of the mine floor collapsed into a subterranean cavern underneath, and several of the nearby prisoners swear they saw some hideous man-things come up out of the hole, grab two of the miners, and escape back down it in the confusion.

There are indeed two missing prisoners, though the overseer thinks they just used the confusion as an opportunity for escape. (A search has been mounted, but the general feeling is that if he shows up in town he'll be caught, and he's welcome to try surviving in the wilderness. Prisoners have escaped before; they usually die anyway.)

Regardless, the miners won't mine. They're spooked by the rumours, and if the prison staff tries to force things, they might fall into open revolt.

The Lord Steward Merriweather has put out a call for any adventurous wild-cat sorts who want to check out the collapse and see whether things are safe, and on the off chance that they aren't, make them so. He's offering 25gp worth of town scrip, because this is supposed to be just a cake walk. If it turns out there's something serious, well, you can keep what you find down there, and taking care of the problem will earn the town's gratitude.

(If nobody decides to take the job, production will start again in a few months after the staff get some reinforcements and clear out the place themselves. But the town will suffer and go down 1 market category or whatever system I decide to use, as production will be slowed for a year until staff gets back up to strength.)

Assuming the PCs take the job, they'll be escorted through the salt mine to the hole in the floor, and

If wandering monster check succeeds, that means 1d6+1 MuDwarfs stumble into party as per normal rules. Subtract from total (20)

Roll reactions. On low rolls, will probably try to alert others. Not stupid.

privy has nothing, just old shit

Faint smell of moisture. Most of west room covered in dried mold (no effects)

One pile larger than the others: MuDwarf patriarch keeps treasure here, including Book of Records


10) Halway to quarters. Pillar is loadbearing.
Each room: complete disarray. Low stone shelf held mattress. Everything torn/soiled/scavenged by MuDwarfs.
Search for 1 turn: 5% chance to find coins/trinkets worth 1d6x25gp. One search only

If PCs keep it, town starts to go weird, and it will whisper visions of megadungeon & other places.Wizard tower will show.

If PCs give it to Church, will gain much favor there & w/ town. (Marchand) Town will not go weird & nasty.

Book of Records: Written in High Qellem (ancient Dwarf) by Parakel (Patriarch) of founding of Ast Knarveth (this place). Describes old Mon Daerdul (megadungeon) & passable directions (in form of 'we traveled from').

Chronicles sealing in, & attempts to get out. Notes strange survival w/o food, and growing comfort. Abandonment of efforts. Descent into madness & barbarism.
Last entry crude & centuries ago.
Bound in old cracked leather. Vellum. Worth 3000gp to sage.

That's 4875gp in treasure, plus a Scroll and Treasure Map. If the party sells the book and orb, that's another 4000gp - for 875gp over the amount needed to go up to level 2 for a party of 4. (Though selling the book and orb won't directly grant XP in my game.)

I think that's accurate for my intent. I don't want the characters to level up off of this place; instead, I want to give them a small taste of dungeoneering and reveal the existence of the megadungeon (which will be a few days' travel away from the town), along with a sense of the Weird. 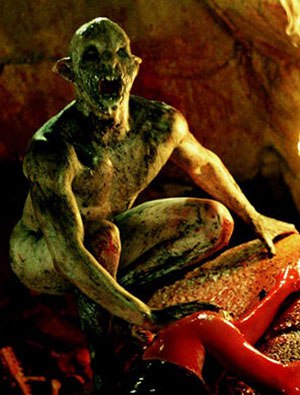