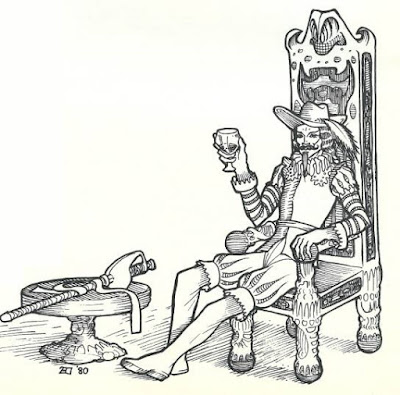 Inspired by a lot of people, including +Jeff Rients, +Peter V. Dell'Orto, and +Chris Kutalik, and
others. I'll try to include links to relevant posts/articles/whatever when I can, but if I forget or can't find it, that shouldn't be taken to mean I'm claiming to be the original author of the idea.

3d6 In Order. Few Exceptions.
The only exception here is noted by LL, where it points out you can trade 2 points down for 1 point up, with restrictions. Those restrictions are still in place. Further, you can only do this if doing so would allow you to play a class you wouldn't otherwise qualify for, not just to get your Prime Requisite into XP bonus territory.

Bonus Languages:
High INT score gives bonus languages as noted. However, these languages do not have to be chosen at creation. Instead, whenever a new language is encountered, the player may choose to roll a D6; on a result of 1-3, the character happens to know that language as a Bonus Language.

Languages can also be learned in play through other means.


Cleric:
I'd love to make clerics start with no spells at level 1, but that sounds exactly like the kind of modification to make players not familiar with the OSR grumble.

Clerics must be either Lawful or Chaotic. Lawful Clerics are Clerics of the Church (more on religion in the Desolate North later) and must be male. Players are encouraged to create sects or brotherhoods or orders to which their clerics belong.

Some Clerical sects (even within the Church) may have different weapon limitations.

Clerics are the only class to automatically know an 'alignment language' - which is the language of their religious proceedings. (In the Church, it's a Latin-analogue.) Well-educated monsters may or may not know an appropriate alignment language.

Clerics may create scrolls as per Holmes: usually 100gp and 1 week per spell level.

Clarification: a dwarf hiring folks for the stronghold can hire dwarves for any job, though it may be hard to find a dwarven spellcaster. However, they cannot hire any other races as mercenaries or soldiers.

Elves have no souls. This means they are immune to spells that directly inflict death or act on the soul; e.g. Ray of Death, Disintegrate or Trap the Soul, but not Prismatic Sphere. However, they cannot be brought back from the dead, either.

Elves can cast spells while using weapons, shields, and armor.

Elves do not have spellbooks. Instead, they gain (and can cast per day) spells as on the below table:


Spells gained are usually randomly determined, though there may be exceptions.

Elves may create scrolls as per Holmes: usually 100gp and 1 week per spell level.

Fighters:
Fighters with DEX 16 or higher may Parry, sacrificing 1 attack per round to give themselves -2 AC.

Whenever a fighter kills a foe with a melee attack, he may immediately melee attack another foe in range. Each new attack is at a cumulative -1 to hit.

At 4th level, any time a Fighter rolls a natural 20 to hit, it hits automatically and rolls max damage. Note that no other class gets critical hits.

At 8th level, a Fighter's damage dice explode. The max damage from a critical hit counts for this purpose.

Halflings:
Halflings may only carry 1 Large Item, and it counts as two. (See house rules for encumbrance here.)

Halflings are universally bald, and they have a parietal eye. Whenever their heads are uncovered, they receive a +1 to saving throws from threats from above at the DM's discretion. When forced to wear headgear they feel distinctly uncomfortable.

Magic Users:
A Magic User starts play with 2 1st-level and 1 2nd-level spell in his spell-book. All other spells must be gained in play. (Not a change, just a note.) One of those spells is Read Magic; the other two are randomly determined. (Not everyone gets Sleep and Web.)

Magic Users may create scrolls as per Holmes: usually 100gp and 1 week per spell level.

Thieves:
Thieves effectively get a complete re-write, based on the alternate thief skill rules from the Hill Cantons and then further modified by Timrod. More detail follows in another post; it's too big to throw here.
Posted by Unknown at 10:23 AM