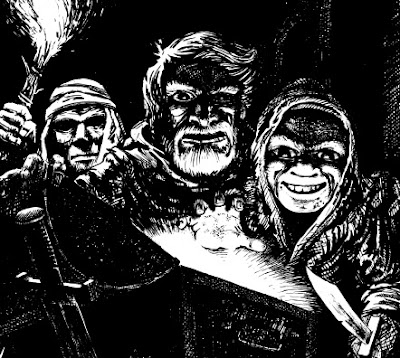 As promised last time, I'm showing my re-work of LL's Thief class. This is all based heavily on the write-up already in Hill Cantons and inspired by Unfrozen Caveman Dice Chucker (I refuse to accept the new name).


Note that a Thief can be of any alignment. In addition to any bonus languages for intelligence, the thief also knows Thieves' Cant, an argot of Common used by ne'er-do-wells to discuss nefarious proceedings.

9th level hideout shenanigans are still possible as per LL.

At 11th level, a Thief's backstab does triple damage.

Instead of advancing along a percentage table with level, thieves are awarded Bonus Skill Levels. These bonus skill levels can be assigned into any skill the thief chooses.

In order to succeed at a skill, the Thief rolls a d10 trying to roll below the skill level.

Double 12: Every time you roll a 12, roll again. A double 12 is always a failure, regardless of skill level.

I'm thinking of completely removing Find/Remove Traps in favor of just giving Thieves a flat 3 in 6 to notice secrets and traps when looking, and a note saying they're likely to be better at removing them than other characters. That skill in particular bothers me for all the reasons it's bothered other people more experienced and eloquent than I.
Posted by Unknown at 11:33 AM