Other notable fauna in the Forest of Fog

I started off the last post with just an idea of "Desert hyacinth monster" and it grew from there. Aaaand then I kind of went overboard with the monster description; nobody needs umpteen paragraphs on a single gimmick plant. So here's some more information on the Forest of Fog for anyone who's interested.

Denizens of the Forest of Fog

The first thing to remember is that there are no animals. Most everything that tries to kill you is going to be a plant, because the plants eat everything else.

There are the hyacinths of course. But there are some others. These are just samples; the Mad Elven King was really, really into horticulture.

Shattergrass
More of a trap than a monster, shattergrass is a delicate, transparent green grass that almost looks to be made from spun glass. From a distance, it looks normal. It grows in patches, usually in gaps in the trees (which it sometimes causes). In the dim light of the forest, it can be hard to tell from regular grass - not that there's much of either.

When disturbed by anything stronger than a gentle wind, shattergrass breaks into thousands of razor-sharp shards, like really thin slivers of broken glass. Basically, moving through a patch of shattergrass is going to cost you 1d6 hp and possibly shred your footgear or leggings.

Trees with a large number of weeping bromeliads on them will have trunks and branches stained a deep red from the juices of the flowering plant. They will also move whenever anything larger than a cat walks by, because the bromeliads are territorial and don't like invaders. 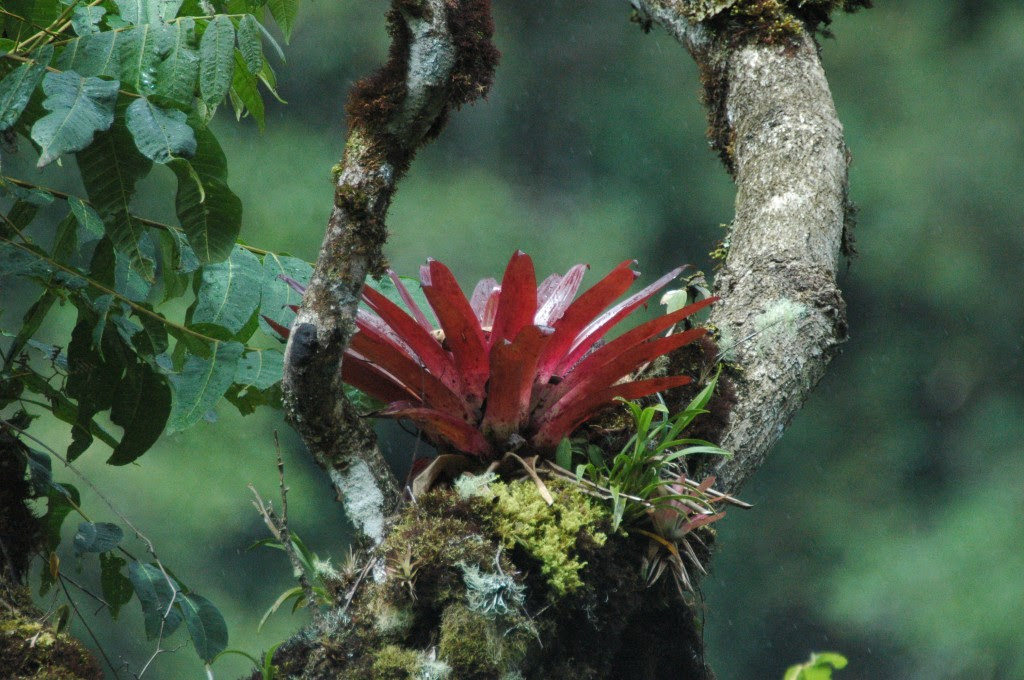 Hangman's moss
Here's another trap-monster. This looks a lot like like Spanish moss, except maybe even longer. It likes to form long curtains, hanging in the air and waving listlessly on any light breeze. Close inspection will show a small assortment of insects, birds, and an occasional bat caught in the curtain and dessicated.

Anyone touching a sufficient amount of the moss (a couple clumps is fine, but a curtain is dangerous) must save vs. poison or be paralyzed. (Elves are not immune.) Anyone so caught will be slowly dessicated, losing 1hp/round as the moss sucks out their bodily fluids. Losing 6 or more hit points in this fashion at a time may cost the character either 1 CON or 1 CHA at the discretion of the GM.

Suggestive forsythia
(The name sucks. Sorry. Feel free to suggest a better one; I'll probably adopt it.) These bushes were magically bred from their mundane cousins in an attempt by the Mad King to create "someone who finally understands me!" They are telepathic.

Many are just lonely and looking for someone to talk to. However, all are subtly (or not so subtly) mad - whether from the original process or the long isolation or just their alien natures, its hard to say.

Only 1 in 6 elves can actually hold something like a conversation with them; everyone else just gets creepy crawly feelings in the back of the skull and an occasional burst of suggestive emotion - save vs charm or be given a two-word suggestion. (Anything obviously life-threatening or morally contrary requires no save.) The forsythia are also accomplished chromatophores, changing the colors of their flowers in various different patterns. This allows a few of them to cast spells via complicated, rapid color shifts. They favor charm effects and other emotion/perception altering spells.

Warpwood
It's hard to say what these trees look like, because anyone wandering within 50ft of them falls prey to an hallucinatory effect that subtly changes the terrain, cloaking certain objects and giving the illusion of progress when in fact they are walking in circles. Once this is noticed ("Hey, I think we passed that tree a couple times before!") the illusion is broken - in game terms, give a secret save every fifteen minutes or so. The thing that makes these nasty is that other, more dangerous plants will often live nearby and be altered by the effect so as not to be noticed until too late. (If this happens, the effect is broken immediately - it doesn't stand up to direct contradiction.

Travellers who are aware of the danger and alert get a save against the effect when they first wander in. Roll once for the leader of a party.

The bark of the warpwood tree contains a powerful hallucinogen that when properly prepared and boiled into a tea gives visions. These are usually relaxing and pleasant, but can occasionally evoke powerful emotions - fear, loathing, lust, despair. There may even be a way for a shaman to use it for a vision-quest of sorts (like use of the Commune spell, with no level requirements, but only 1 question). Overuse, especially of potent concoctions, can lead to all kinds of nasty effects best left to the DM.

One 'dose' - a given tree will have enough easily reachable bark for 50 or so, if you want to carry a bunch of bark around - is probably worth 5gp to the right buyer.

That's great, but how do I use this?

Good question. Once the players figure out the gimmick of the place, the solution is simple: stay away from the plants. They mostly can't come after you.

The solution to this is to put them near/around something the players wan to investigate and so much brave the dangers of the plants to do so, or to place them in such a way that the players don't know until it's too late that they're wandering into danger. (Warpwood is an example way to do this latter one, but if you use 'it's a mind-screwy tree!' too often, your players will probably get angry.)

Concrete examples, as well as notable areas of the Forest of Fog and random encounters should be forthcoming shortly, like in the next post.
Posted by Unknown at 9:54 AM