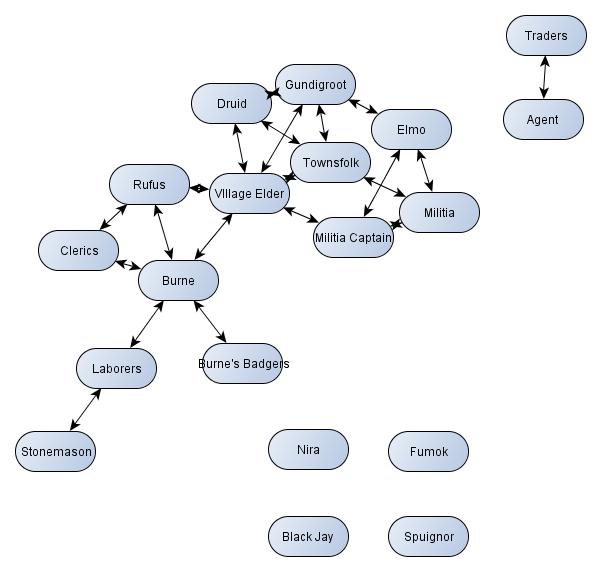 I made this very simple relationship map as a quick-and-dirty explanation of how various different people in Hommlet connect with one another. It doesn't include everyone, just everyone I thought might be interesting to put on such a map. (For example, the braumeister and cabinet-maker aren't on this map; they're just subsumed under 'Townsfolk'.)

I'm using it as a loose who-gets-involved indicator. So, if Burne gets in trouble somehow, natural responders might be the Badgers, Rufus, the clerics of Cuthbert, and the village elder (and through him the militia or other townspeople).

There are some things not shown on the map, too. For example, Black Jay is the villager whose wife and child were killed while he was away during 'the wars', which I'm spontaneously deciding means they were killed by agents of the Temple during a raid from the Moathouse while he was away - the wars being, specifically, the one of Veluna against the Temple. Thus, if he finds out the traders are active agents of the temple, he's liable to gird himself and go burn them out, by himself if he must. However, seeing these relationships mapped out visually like this does make it easier to both represent the individuals in Hommlet with better veracity and to draw up a loose timeline of happenings.

Here's what will happen in Hommlet if the PCs don't interfere somehow (say, by raiding the Moathouse):
By this point, the village is still playable, but it becomes somewhat harder. Villagers are less inclined to trust strangers, and the Temple's influence is growing faster than ever. I could go further, but I don't see the point - almost certainly, the players will do something to keep anything beyond point 2 (possibly point zero) from happening. This is just a tool to make sure the village doesn't become stale.
Posted by Unknown at 2:36 PM